Glaucoma is a common disease which can cause a progressive loss of vision if left untreated. The good news is that with modern day advances in technology, we now have excellent methods of diagnosing glaucoma and effective therapies for treatment of this disease.

Glaucoma affects the optic nerve of the eye which sends signals from the eye to the brain where they are processed to form images. In patients with glaucoma, there is a slow, progressive loss of the nerve fibers which make up the optic nerve. You cannot see your optic nerve but your Ophthalmologist is able to see it when examining you at the slit lamp, a special microscope for eye examination. He or she may use special lenses or devises to visualize our optic nerve.

If you are diagnosed with glaucoma, there are several treatments available.

If you have any concerns or questions regarding glaucoma or would like more information on glaucoma, please contact our office to set up an evaluation.

Depending on your general health, eye health, and family history, a number of factors may increase your likelihood of developing glaucoma. An increased risk of glaucoma occurs when you:

Prolonged use of oral contraceptive birth control pills, as well as the early onset of menopause, may increase glaucoma risk in women, and anyone suffering from sleep apnea needs to be carefully examined as this condition significantly increases glaucoma risk.

If you have had trauma to your eyes such as from a sports injury or car accident, or if you have been treated for asthma or other conditions for long periods of time with steroid inhalers, or have a corneal thickness less than 0.5mm, you too might be at greater risk of developing glaucoma. 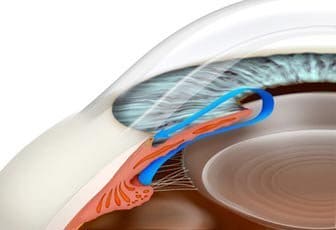 Patients with Primary Open Angle Glaucoma usually have an increase in Intraocular Pressure (IOP) upon routine measurement, called Tonometry. Acute Angle Closure Glaucoma is one of the only types of glaucoma that causes obvious symptoms that may include pain, light sensitivity, redness, blurred vision, colored haloes around lights and nausea or vomiting and is a medical emergency.

If these symptoms occur please call one of our locations for an immediate appointment.

Aqueous fluid is a clear and watery ultra-filtrate of blood that fills the anterior and posterior chambers of the eye. Flowing more at night than in the day, it is a source of nourishment for the eyes and plays a part in waste removal. The eye forms and reabsorbs aqueous fluid continuously. The regulation of intraocular pressure (IOP) is in part a result of the flow of aqueous fluid. IOP can be determined by comparing the inflow versus the outflow of aqueous fluid in the anterior segment (the chamber on the front of the eye covered by the cornea) IOP remains constant if the outflow is equal to the inflow. If outflow is less than inflow, the IOP rises.

Most people with glaucoma suffer from one of two major types of the disease: “open angle” and”closed angle” glaucoma.

HEPS provides glaucoma treatment for both disease types in all of our office locations.

What is the angle?

To better understand these two types of glaucoma we first have to explore why the term”angle” is used to describe them.

The anterior chamber is the fluid-filled space inside the eye between the iris and the cornea’s innermost surface, the endothelium. Aqueous fluid fills the anterior chamber. In differentiating between open angle and closed angle glaucoma experts use the iris, the corneal endothelium, and the trabecular meshwork as points of reference.

Chronic open angle glaucoma progresses at a slower rate and is often not noticed until there is a significant loss of vision. On the part of doctors, being vigilant and asking patients questions can uncover underlying risk factors. Eye pressure being above normal levels is not the reason all people have open angle glaucoma, however decreasing eye pressure has been proven to forestall the progression of glaucoma even in the cases where elevated pressure does not occur. Peripheral vision tends to be affected first, and if not treated, open angle glaucoma will lead to a total loss of entire vision.

Closed angle glaucoma is diagnosed when aqueous fluid cannot reach the anterior chamber angle. It accumulates and forces the iris to obstruct the trabecular meshwork. Contact between the iris and the trabecular meshwork may ultimately damage the function of the meshwork so that it fails to respond to aqueous fluid production leading to an increase of IOP (intraocular pressure). Scars called synechiae form, causing an irreversible block in aqueous outflow.

Most cases of closed angle glaucoma do not reveal themselves through symptoms. In the cases where symptoms do occur patients experience eye pain and redness, blurred vision, headaches, vomiting, and the appearance of halos. In addition to these symptoms doctors look for mid-dilated pupils, lack of response to light, cloudy corneas and reduced vision to diagnose closed angle glaucoma.

Individuals with poor blood flow are at high risk for neovascular glaucoma which is rare, untreatable, and characterized by the development of abnormal vessels that block fluid drainage in the eye. Toxic glaucoma which is also untreatable results from an unexplainable rise in intraocular pressure.

Absolute glaucoma is the final stage of glaucoma. This stage is marked by total loss of vision, pain, and a stone-like appearance of the eye. Treatment is focused on reducing pain and keeping the eye comfortable.

During your examination, we may perform a number of tests in order to make the most accurate diagnosis of glaucoma. These include: